Body Instrument Practise is a collection of contemplative exercises, developed by Peder Karlsson, where the singer builds musical and rhythmical awareness from the inside out, through visualisation of notes, musical phrases, rhythms and physical movements. The goal is to build a solid self-confidence based on body awareness, stable intonation and a physical sense of rhythm.

Participants of this discovery atelier should log in to www.therealgroupacademy.com and access a selection of instruction videos before the session in Tallinn. 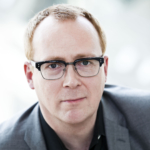 Peder Karlsson studied classical composition, arranging and guitar at The Royal Academy of Music in Stockholm, Sweden, and graduated with a post-graduate Diploma in vocal group performance. He was member of the Swedish a cappella group The Real Group 1984-2010, and has made over 2000 concerts all over the world and 16 CDs. In 2011-14, Peder Karlsson was Musical Director of the XXL vocal group Perpetuum Jazzile, Slovenia and is now the group’s Music Mentor. Peder teaches choir leadership in rhythmic music at Royal Academy of Music in Aalborg, Denmark with the title ”Honorary Professor”. As a freelance teacher, workshops leader and music event organizer, he has been part of numerous activities in many countries. Peder is a founding member of European Voices Association and a part of the activism network Rights of Nature Sweden.