Do you want to learn an easy, fun and brand new arrangement of a cool pop song that will probably be stuck in your head for the rest of the day? Then join us when we sing pop at it’s best!
While singing we will work a little bit on the sound colours of the voice and we will try to find the right expression and energy to make a great performance of the song at the end of the session! 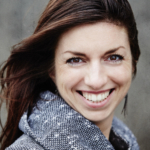 Line Groth is a singer, arranger and co-conductor in the world famous Danish choir, Vocal Line with whom she has performed with The Rolling Stones, Bobby McFerrin a.o. She has been teaching choir conducting at the Royal Danish Academy of Music in Copenhagen and she holds a MA in Singing and Choir Conducting from The Royal Academy of Music, Aarhus. Line Groth sings in the electronic vocal group, Postyr. Postyr is touring all over the world, has released several CD’s with their original music and in 2016 the group won a CARA Award for Best European Album. Finally, Line Groth is conductor of the very talented Danish Youth Choir, Syng Selected that has recently been selected to participate in the international competition for choirs at Aarhus Vocal Festival. Line Groth is teaching and coaching choirs, singers and conductors throughout Denmark, all over Europe, in the US, Israel, Greenland and Taiwan and she is known as an inspiring and dedicated teacher.