The richness of Georgian vocal polyphony was nominated in 2001 as immaterial world cultural heritage. Tamar Buadze, instrumentally supported by her son Irakli, will introduce songs out of the matriarchal period in Georgia, as well as songs out of the Caucasus (including yodeling), work- or love songs. She partially discovered those songs by herself through her continuous searching for traditional songs in order to rescue them from being forgotten. 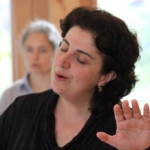 Tamar Buadze graduated from the national conservatory V. Sarajishvili, Tbilisi, founded and led since 2004 the TUTARCHELA women’s choir and the 2nd and 3rd generation of the initial TUTARCHELA choir – now as mixed youth and children choirs, which excite with vivid and innovative interpretations of Georgian folk music. Buadze’s arrangements, various seminar and concert activities built up an intercultural dialogue with Swiss and German musicians, choirs and their folk, classical and popular music repertoires. At the Frankfurt Book Fair 2018 in October Tamar Buadze and Imke McMurtrie will publish a collection of Georgian folk and healing songs out of the matriarchal period.