Unconventional Choirs from around the World

6500 children beatboxing together creating the world’s largest beatbox ensemble, a choir producing the soundtrack for a silent movie at the Grammy Awards, Finnish men shouting Beethoven’s Ode to Joy.. these are just some of the weird and wonderful choirs that exist around the world. Tobias Hug has encountered many of these on his musical travels and presents some of the most interesting and original ensembles. Having worked with many of these himself, he will give an insight into their creation and background. 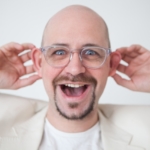 Explorer of the human voice, compassionate and inspiring teacher, vocal whizz-kid and entrepreneur, a cappella journeyman and beatbox gypsy – Tobias Hug has been singing, teaching, travelling for more than 20 years. He is deeply involved in the a cappella, choral music and beatbox scene around the globe, one of its connecting and most connected figures.
Based in London, he currently performs with his vocal group Beatvox as well as with The Beatbox Collective , an UK All-Star Group, which currently holds the title of World Beatbox Team Champions. He is a Guinness World Record Holder for creating the largest ever Beatbox Choir with 6430 participants in Hong Kong.

Tobias holds a Master Degree in Rhythmic Choir Conducting and Vocal Leadership – a unique course only taught at the Royal Conservatory of Aarhus & Aalborg. His deep passion and commitment to teaching leads to workshops and residencies in places as diverse as Singapore, Norway, China and Kenya. From 2001-2012, Tobias sang with Grammy-Award winning a cappella group The Swingle Singers and was one of their longest-serving members. As their bass and vocal percussionist he was part of seven studio albums, and performed more than 700 concerts around the world – from Teatro alla Scala to the Kremlin Palace. As their former Artistic Director (2008-10), he set up collaborations, recordings and projects – e.g. the world’s first Beatbox Choir together with Björk-collaborator Shlomo. The Swingles’ or Tobias’ arrangements & voices can be heard on TV show “Glee”, on a Monty Python movie as well as many TV adverts (e.g. T-Mobile’s “Welcome home” Flashmob campaign)