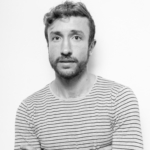 Pieter Bezuidenhout is one of South Africa’s most prominent young composers; bridging the gap between the older and the younger generation of composers. For his choral work Stardance he has received the award in composition from the European Academy of Choral Conductors. Bezuidenhout is regularly commissioned locally as well as internationally to write works for ensembles ranging from instrumental chamber groups to festival choirs. His works have been performed in Washington, Bratislava, Istanbul, Tokyo, Hong Kong and Singapore. Bezuidenhout’s choral works are regularly chosen as prescribed works for South African choral competitions. 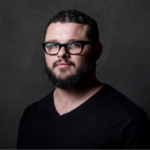 Composer Franco Prinsloo creates in a diverse variety of styles including choral, classical, contemporary, new music, cabaret and theatre as well as pop music and electronica. He has composed and directed extensively for the stage including Kind(s) (2015), CODE (2015) and Mosioua (2016) to name but a few highlights. For the past three years he has been the Musical Director for the Nedbank Arts and Culture Trust performing arts Scholarships. He is an active composer in the new music scene in South Africa including The Horizons Project choir and the Paz Consort. Prinsloo is commissioned by prominent choirs. His choral piece Pula, Pula! (from his musical Naledi – an African journey) was commissioned by the NWU PUK Arts for The King’s Singers to be performed in their programme in 2017. His compositions are frequently chosen as prescribed works at choral competitions.