Conductors Maria van Nieukerken and Mikko Sidoroff will present their work with EuroChoir, which attempts to bring music even closer to the hearts of singers and the audience. With practical exercises and an active discussion, they hope to engage you, too. 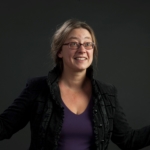 Maria van Nieukerken is conductor of the professional chamber choir PA’dam, the Belgian National Youth Choir and Toonkunst Rotterdam. Maria leads various workshops for singers, conductors and choirs and she conducted EuroChoir 2017 & 2018.
She is active as guest conductor and assistant conductor for example for Cappella Amsterdam and Collegium Vocale Gent.
Maria distinguished herself with performances with contemporary music combined with theatrical elements. Maria is regularly a member of the jury in international choral and composition competitions such as the International Competition for Young Choral Conductors. 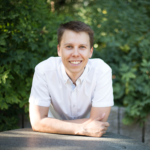 Mikko Sidoroff (b. 1985) is a choral conductor and composer from Helsinki, Finland. He graduated from the Sibelius Academy in 2011 as Master of Music and has been working as a conductor, composer and music editor since 2002. Sidoroff has composed numerous pieces for different choirs and conducted many first performances. He currently resides in Mannheim, Germany. Sidoroff is the artistic director of the Krysostomos Chamber Choir, which he founded in 2003. This year, he will work as guest conductor of the EuroChoir and as choral conducting teacher at the Bundesakademie in Germany. In addition to music, he also works as a yoga teacher.