Sister Marana Saad will be presenting for my workshop a Lebanese folk song describing the beauty of Lebanese nature and birds. The text is written by Wahib Keiruz and arranged by the Lebanese composer Toufic Succar (1922-2017) in 1972 for mixed choir with an oriental instrument (qanun). The modes of this song are in Bayeti Re and Rast Sol with different movements.

This atelier is presented by the project Sing Me In. Read more about it here 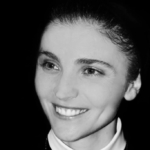 Marana Saad is the Founder, President, Conductor and Instructor at St Rafqa Music Institute and Choir – Lebanon, a professor at the Holy Spirit University of Kaslik. She holds a PhD in monastic theology from St Anselm University – Rome, and a PhD in sacred music from USEK- Lebanon. She studied choral conducting at the Institute of Sacred Music – Rome. She directed concerts with prominent orchestras all over Lebanon and abroad (France, Cyprus, Italy, Poland, Germany and USA). Sh​e has participated in different conferences, workshops and has published musical articles and composed several CDs.