This atelier offers a whistle-stop tour through around 900 years in musical history. We start with the first notated music, from the monasteries of the eighth and ninth centuries, before making stops in medieval Europe, exploring both sacred and folk music, and finally ending up in the Renaissance. We will become acquainted with Gregorian chant and its neumatic notation, and explore the principles of performing and arranging medieval, Renaissance and folk music. Historical instruments will accompany the singers on their journey. 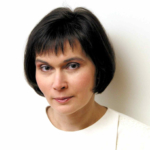 Kadri Hunt is a singer, choir conductor, composer and arranger. She is the chief conductor of the children’s and girls’ choirs of the Estonian Radio and of St Michael’s Boys’ Choir. She also sings in the Gregorian chant ensemble Vox Clamantis and the sacred music group Heinavanker, and has performed with Capella Reial de Catalunya for several times. Kadri Hunt has lead ateliers in EUROPA CANTAT junior 2011 in Pärnu, and EUROPA CANTAT XIX in Pecs.