Have you ever wondered what it’s like to be conductor? In this atelier Florian Helgath will show some tips and tricks from the conducting side which can help to improve your singing and phrasing during choir performances! 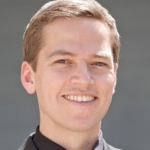