The workshop introduces Gregorian chant, which began to develop in the 9th century and now represents the oldest European musical tradition surviving in written form. Monodic and non-metrical, Gregorian chant was the basis for early European art music, also exerting an influence on much later music. But Gregorian chant still features in the liturgy of the Catholic Church: it is a living tradition that is still relevant in our own time. In this atelier, we will explore and interpret chant, and seek to better understand its importance in a historical context. 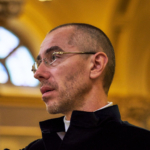 Jaan-Eik Tulve graduated from Tallinn Conservatory in 1991 and specialized in Gregorian chant at Le Conservatoire National Supérieur de Musique et de Danse de Paris (CNSMDP). He has given many courses in Gregorian chant in France, Belgium, Italy, Norway, Scotland, the Faeroe Islands, Lithuania, Finland and Estonia. Jaan-Eik Tulve has been often invited to lead work-sessions in monasteries and workshops at festivals. In 1992 Jaan-Eik Tulve became the conductor of the Choeur Grégorien de Paris and has appeared with the choir in many European countries and also in Lebanon. Many of the recordings he has made with the choir have received great critical acclaim (Diapason d’Or). In 1996 he took up a position teaching Gregorian chant at the Estonian Academy of Music and at the same time formed the Vox Clamantis in Tallinn. Jaan-Eik Tulve has been awarded the Order of the White Star of the Republic of Estonia, the Order of Léopold of the Kingdom of Belgium and the Order of Arts and Letters of the French Republic.