Discovery for youth and children’s choirs

In this atelier, featuring arrangements of much-loved jazz, pop, and rock songs, younger singers are invited to come together to groove and have fun together! 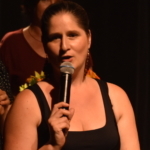 After her studies to be primary teacher, and her studies in classical singing, choir conducting, harmonizing, Florence Huby as conducted several choirs since the beginning of the years 2000: Les Colibris de Liège, the Choir of the Cathedral in Liège, la Choraline (with Benoît Giaux), and 2 choirs (children and teenagers) in the music academy in Auderghem. She’s actually conducting a project choir of A Coeur Joie, Around 40, with a collegue, Olivier Bilquin. She has arranged half of the program of pop songs for that project. She used to sing in several choirs from her teen age such as Fugato and Montferrant (Marie-Claude Remy), Octava Alta (Benoît Giaux), World Youth Choir (Frieder Bernius/Gary Graden, Paul Smith/ Peter Erdei, Stephen Zegree, Florian Heyerick) and several projects in pop and jazz vocal music. She’s a member of Witloof Bay (pop jazz a capella), since its foundation and she’s also member of the orchestra of the TV show The Voice Belgique, as leader and arranger of the backing vocals. She makes a lot of arrangements for choirs, mostly in pop music.