A Million Colours of the Human Voice

In his interactive lecture Vahram Sarkissian is going to observe the human voice from a novel perspective by presenting and demonstrating many extended vocal possibilities deriving both from ancient music traditions throughout the globe and from his own research and exploration. He will present the mesmerizing world of surprisingly diverse and unusual extended vocal world by demonstrating live sound examples, live improvisation with a looping station as well as by involving the audience in the sound production process. 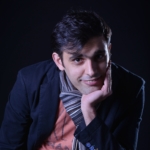 Armenian Canadian composer, conductor and experimental vocalist Vahram Sarkissian is known for his novel approach to the human voice which he presented at several symposiums and conferences most notably at the WSCM11 in Barcelona in 2017. His music has been widely performed across Europe, Asia and North America. His style represents a multicultural ‘palette’ of sounds spanning from V century Armenian chants to previously unreported extended vocal techniques. As a vocalist Sarkissian developed a distinct sonic identity with a rich assortment of techniques and signature sound production methods.