Winners of the European Award for Choral Composers

The session will be introduced and moderated by Dr Zsuzsánna Mindszenty, President of KÓTA, and Gábor Móczár, Board member of KÓTA in charge of international affairs. The three composers —Peter Tóth, Levente Gyöngyösi and Sándor Balatoni—will present their works shortly and we can listen also to some nice recordings of the award winning choral works. The composers will tell more about the background of their pieces, and about themselves. 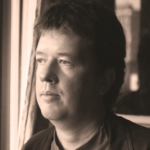 Peter Tóth was born in the city of Budapest in 1965. He completed his studies at the Béla Bartók Conservatory as a double major in percussion and composition, where his teachers were Oszkár Schwartz and Miklós Kocsár. In 1985 he was admitted to the Franz Liszt Academy of Budapest, where he earned his degree in composition (1990), studying with Emil Petrovics. He also holds a degree in sound engineering, cultural management and public education leadership. He attained his Doctoral Degree in Music in 2008.
Péter Tóth has composed sound tracks to numerous movies/motion pictures as well as worked as sound engineer and director in several of those projects. As an international composer of Classical and Choral works, his music is regularly performed in Europe, North America and throughout the world. He is a founding member of the first online Hungarian classical magazine “Café Momus”, and is co-founding member and owner of Kontrapunkt Publishing Co. (2009).

Dr. Sandor Balatoni was born in 1983 in Pecs, Hungary. He learned to play the piano from Ildiko Megyimorecz at the Franz Liszt Music School. During high school he learned to play the organ from Szabolcs Szamosi, at the same time he studied composition at the Conservatory of Pecs as a student of Istvan Gyorffy. In 2008 he got a degree in church music at the Hungarian Church Music and Liturgic Institution in Budapest. During these years he studied composition, improvisation and playing the organ from Istvan Koloss and conducting from Laszlo Tardy. He has received his doctoral degree in 2017.
In 2009 he won the Special Prize of the Hungarian Jesuit Society’s choral composition competition, in 2010 he won 3rd Prize at the Millenium Jubilee Composition Contest of the Diocese of Pecs, in 2014 he won the Special Prize of the Night of the Choruses festival’s choral composition competition. His works has been performed in several countries including all neighbour countries, Italy, Belgium, China and in the US. In 2012 he was awarded with the Junior Prima Prize of the Prima Primissima foundation. In 2016 he has been awarded with the Csorba Prize for his composition. In 2017 he has won 1st Prize at the European Award for Choral Composers from the European Choral Association. 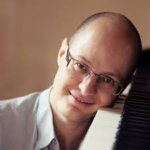 Levente Gyöngyösi was born in 1975 in Cluj-Napoca, Transylvania. In 1989 he moved to Hungary where he was admitted to the Bartók Conservatory as a composition and piano major. His composition professor was István Fekete Győr and piano professor Katalin Schweitzer. In 1993, he was admitted to the second year of the composition department at the Liszt Academy under professor György Orbán, which he graduated summa cum laude in 1999. In 2000 he won second prize with his two-act opera The Stork Calif, based on a Mihály Babits novel with Zsófia Balla’s libretto, at the Millennium Opera Competition of the Hungarian National Opera. Between 2002 to 2010 he taught score-reading, instrumentalisation and composition as a professor’s assistant at the Liszt Academy. In the school year of 2011/2012, he taught composition at the Weiner Conservatory. In 2012, he participated as a juror in the World Choir Games international choir contest which inspired ten thousand people in Cincinnati (USA). Later, he was a juror at several choir contests: Bartók International Choir Competition in Debrecen (2013); Budapest International Choir Competition (2014); World Choir Games, Sochi, Russia (2016) and the International Choir Composition Competition, Japan (2016). Levente has won numerous outstanding professional awards: Ferenc Erkel Award (2005); Talent Art Award (2008); Artisjus Award (2008); March Youths Award (2009); Bartók-Pásztory Award (2009); Benedek Istvánffy Award (2012, 2014).