Singing with boys and working with breaking voices

Acclaimed boys’ choir conductor Vytautas Miškinis will discuss the process of boys’ choirs losing their best sopranos increasingly earlier due to accelerated puberty, the tradition of communication of boys’ choirs in the Baltic States, and offer a review of the DVD Men should sing. 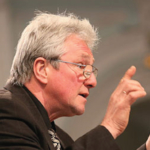 Vytautas Miškinis is the Artistic Director of the Ažuoliukas Boys’ and Male Choir, professor of choral conducting at the Lithuanian Academy of Music and President of the Lithuanian Choral Union and renowned composer. He began his career in Ažuoliukas at the age of seven as a vocalist, and continued as Artistic Director from the age of 25. All the achievements of the choir from 1979 have been due to Mr Miškinis’ leadership. For several years he conducted the Kaunas State Choir and Vocal Ensemble Museum Musicum. He has composed about 400 religious motets a cappella, 18 Masses, Magnificats, Cantatas, Musicals and about 400 secular songs, which are performed by choirs throughout Lithuania and the rest of Europe.