Jeremy Jackman, former member of the significant vocal ensemble The King’s Singers will take you to the world of the King’s music. This atelier is for vocal ensembles and individual singers who are working without microphones. 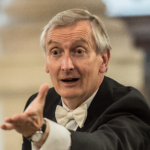 Jeremy Jackman (UK) has been Chorus Master of the London Philharmonic Choir and the Belfast Philharmonic Society. He is now Musical Director of the English Baroque Choir, Chorus Master of OSJ Voices (the choir for the Orchestra of St John’s), and conducts the Cecilian Singers in Leicester. His compositions and arrangements are performed around the world. He frequently directs courses and workshops in the UK and abroad. Jeremy started his career as a singer, performing throughout Europe as a soloist, as a member of fledgling versions of The Tallis Scholars and The Sixteen, and in opera. As a member of The King’s Singers for 10 years he performed many times over in the world’s most prestigious concert halls and made countless recordings, and radio and TV appearances.