In this atelier, you have the unique opportunity to work closely with two conducting composers and to be part of the instrument of the composer. 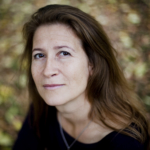 Ulrika Emanuelsson (SE) is a Swedish composer, conductor and singer, educated at Malmö Academy of Music at Lund University. She has a double degree, in eurythmics and singing as well as a Master in composition. She has won several awards for her choral compositions both in Sweden and abroad. Ulrika has been called ”one of the most interesting Swedish composers of choral music today, always with a very conscious choice of lyrics.”
Ulrika has been the artistic leader of Carolinae Female Choir since 2003 and has won gold medals at the International Choir Competition in Budapest 2013, World Choir Championships in Riga 2014 and in Meeting Music in Rome 2016. With her ensemble she takes on new vocal techniques and genres from all over the world with fearlessness and a great thirst: the Northern joik, Arabian folksong as well as overtone-singing and Indian kollakol.

Pärt Uusberg (EE) is an Estonian conductor and composer. He is graduated from Georg Ots Tallinn Music School in choir conducting (Heli Jürgenson) and Estonian Academy of Music and Theatre in composing (Tõnu Kõrvits). Currently he continues on both speciality, conducting his chamber choir Head Ööd, Vend founded himself and composing choral music, chamber music and music for orchestra and films. He has won special mention in European Award for Choral Composers 2012. His works have been performed in Estonian Song Celebrations, and commissioned and premiered by Netherlands Chamber Choir, Vancouver Youth Choir, Coastal Sound Youth Choir and many Estonian festivals and choirs.