B3 Joyful Journey Into Early Music

Join us in the exciting musical time travel across Europe! The journey takes us together with Spanish pilgrims to picturesque mountain paths and miraculous medieval monasteries, we party in glamorous royal courts of the Renaissance era. Our travel companions are also young instrumentalists from the Early Music Group of Kiili. The Early Music Highlights, that we learn together, form a valuable insight into the world of historical music. 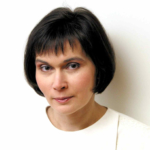 Kadri Hunt (EE) is a singer, choir conductor, composer and arranger. She is the chief conductor of the children’s and girls’ choirs of the Estonian Radio and of St Michael’s Boys’ Choir. She also sings in the Gregorian chant ensemble Vox Clamantis and the sacred music group Heinavanker. Kadri Hunt has lead ateliers in EUROPA CANTAT junior 2011 in Pärnu, and EUROPA CANTAT XIX in Pecs.