B13 Tales From Anatolia

Explore stories from the shores around the Aegean Sea, where the cradle of modern civilisation lies. Discover a rich history with vivid music traditions. 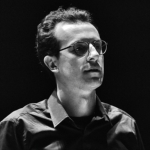 Cemi’i Can Deliorman (TR) is an acclaimed young conductor from Turkey. Since 2010, he is serving as the Principle Conductor & Artistic Director of the State Choir Turkey and associate conductor of the Presidential Symphony Orchestra Turkey. He is often invited to distinguished symphony orchestras as guest conductor. Initially trained as a violinist, Deliorman graduated from the University of Music and Performing Arts Graz in Austria. In 2010, he received his Master’s degree in orchestral conducting with Martin Sieghart and in choral conducting with Johannes Prinz. He has also studied with renowned choral conductors like Dr Joe Miller and Dr James Jordan in Westminster Choir College in Princeton and worked with the Westminster Symphonic Choir. Deliorman conducted numerous concerts in the last years, including performances of Verdi’s and Mozart’s Requiem, “Carmina Burana” and Beethoven the 9th. Deliorman continues to teach conducting at the Bahcesehir University Choral School and he
is the author of the book “Gustav Mahler – Auferstehungssymphonie” released from
Akademikerverlag in Germany.